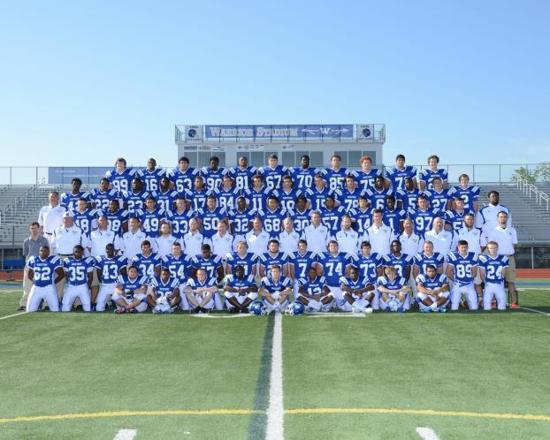 Congrats Varsity on a great season!

o City, Division and Conference Champions
o One of only 6 teams in School history to go through the Regular Season (8-1) with only 1 or no losses.
o #1 Academic Team in Division 1
o 2013 Steve Spicer Leadership Award

DETROIT >> Walled Lake Western showed off a new cast of characters on the football field Thursday down at Wayne State University in the opener of the annual Prep Kickoff Classic and the fresh faces made quite the first impression.

Brand new Warriors quarterback Sam Johnson looked composed and comfortable in the pocket throughout and ran for two touchdowns, including the game-winner with 2:15 left to lead Western to a 19-14 defeat of a highly-hyped West Bloomfield squad.

Western (1-0) advanced to the Division 2 state finals last year. Johnson, a 6-foot-3 junior, landed with the Warriors back in the winter in a transfer from Southfield A&T.

The Oakland Press had West Bloomfield as the No. 1 team in the county in its preseason rankings, while Western came in at No. 6.

“I’m not making excuses, we played a very good team today, don’t be fooled (because they lost some talent from last year), they still have a lot of guys that played in the state championship game left,” West Bloomfield head coach Ron Bellamy said. “We’ve got to get better. It’s on me as the coach to get this corrected. I’m not going to let this happen again.”

Loaded with college recruits on both sides of the ball, West Bloomfield (0-1) missed a short field goal to start the fourth quarter.

The Lakers’ offense had multiple shots at the end zone in the game’s final seconds from within 35 yards to no avail.

The contest was tied 7-7 at the half. West Bloomfield jumped in front 14-13 at the 4:59 mark of the third frame on senior quarterback Bryce Veasley’s 3-yard scoring scramble. He had a 50-yard rumble into the red zone on the previous play.

Veasley is committed to Bowling Green. Johnson and Veasley ran in a touchdown apiece in the first half. In addition to his pair of touchdowns on the ground, Johnson completed 17-of-30 passes for 230 yards.

West Bloomfield will kick off league action out of the OAA Red in Week 2 against Bloomfield Hills. Western gets its Lakes Valley Conference schedule under way next week. The 2017 campaign is the inaugural season for the Lakes Valley, a breakoff from the Kensington Lakes Activities Association where Western was the four-time defending league champion from the Northern Division.

Detroit Free Press All-North: Cody White did it all for Walled Lake Western

Double- and triple-check Walled Lake Western’s roster all you want – you’re still only going to find there’s only one player listed as wearing jersey No. 7.

And that might be hard to fathom, because that player, Cody White, seemed to be everywhere at once for the Warriors, who played into the Division 2 state championship game.

Last season, White excelled as a split end, one of Kyle Thomas’ favorite targets. And with Thomas graduating last spring, White was poised to step in under center this season.

Then Johnny Tracy transferred in from Birmingham Brother Rice, and White was penciled back in as a receiver. But when Tracy hurt his shoulder, White began taking snaps again, leading the Warriors to victories in their first three games (one ultimately was forfeited due to use of an ineligible player). White continued to see spot duty as quarterback after Tracy returned to the lineup.

“We can line him up at several different positions,” coach Mike Zdebski said. “We were lucky. In high school, he’s going to do a little bit more than anybody else, and there’s a lot of ways for him to help us.”

Zdebski’s squad was rich in talent this year, but White was the go-to guy. In Western’s 37-34 semifinal victory over longtime nemesis Lowell, White had a long touchdown run right before halftime, threw for another touchdown pass, and banged out a big 12-yard run when the Warriors were facing fourth-and-8.

“He’s about the win, not about the stats,” Zdebski said. “He’s a consummate team player; he’s going to block if he needs to block.”

The 6-3, 205-pound blue chipper committed to Michigan State before the season started, and Zdebski sees White shining as a Spartan.

“We’ve had players here before that were really good high school athletes that went Division 2, but he’s going to excel at the next level because he’s physical, and not afraid to deal with pressure,” Zdebski said. “I think they offered him because of his physicality, his size and how well he moves for being as big as he is. He’s a big target on the flank and he causes matchup problems for short cornerbacks. He doesn’t just get open, but he’s going to make sure to get open, whether it’s push, pull or pry.”

“He’s a very well-rounded young man,” Zdebski said, “and he’s decided he wants to be the best in everything he does, which is what all the great ones do.”

COACH OF THE YEAR: Walled Lake Western’s season wasn’t billed as the “Kensington Lakes Activities Association Farewell Tour,” but it could have been. The 12-2 Warriors ran the table in the mega-league, which will be breaking up at the end of the school year.

After two more post-season wins against Fenton and Lowell, Western finished as Division 2 runner-up after dropping an 18-0 game against Detroit Martin Luther King at Ford Field.

“We had depth at positions, that’s the deal,” Zdebski said. “Whenever you’re able to have a Division 1 quarterback (Tracy), but when he goes down, stick a kid in there who’s dynamic like Cody White, and replace him with some really good athletes like Kevin Jackson and Abdur-Rahmaan Yaseen, that really helps.”

Zdebski, a math teacher at Western, also led the Warriors to a state championship in 1999 and to three semi-final games since then. He’s 154-57 in 19 seasons

Before winning the award, White was automatically entered into the Mr. Football Final Four by winning the online fan vote with over 8,500 votes. 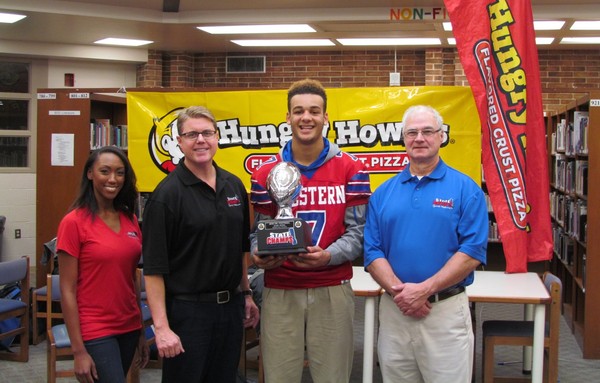 State Champs! Senior Editor and Analyst Tom Markowski said that White’s versatility was one of the many key factors that was taken into consideration for the Mr. Football Award.

“One of the most versatile athletes I’ve seen in the last 10 years,” he said. “When you have someone who can play at a high level at quarterback, wide receiver, defensive back and kick returner, it adds so much to the team aspect of football, because football is a team game and Cody was a team player.” 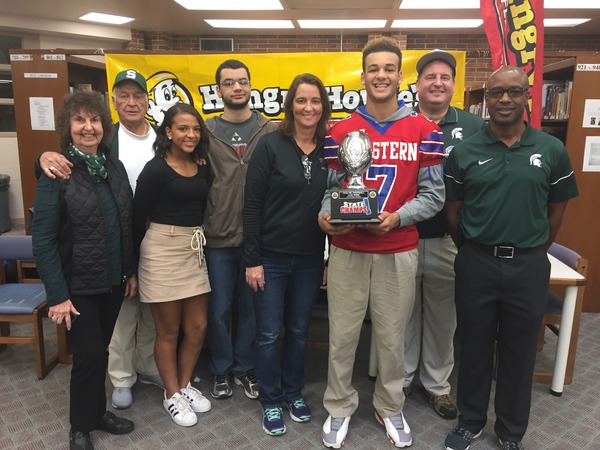 White’s father, Sheldon White, who spent six years in the National Football League and was also an executive with the Detroit Lions organization, said that he was proud to see his son’s senior season end with the Mr. Football award.

“I’m so excited for him because I just know how much time and work he’s put in as a player,” he said. “It was just really exciting to see how he played this year. It was great to be able to watch every game and see everything.”

Western head coach Mike Zdebski said he was happy to see White’s hard work rewarded with the Mr. Football award and added he’s excited for the school and the football program as well.

“We’re proud for Cody for all of the work that he’s put in and for his family and all of the time they’ve put in,” he said. “It’s great for our school and our program, it puts us up there that having Mr. Football in your school – it’s the Heisman of high school football – and for him to win that award for our school and our community, the exposure and the positive-ness shines on our community and school, you can’t beat it.”

White, who is committed to continue his football career at Michigan State, helped lead Western to its first State Finals appearance since 1999 this past fall, where the Warriors fell to Detroit King.

State Champs! Network Executive Producer Lorne Plant said that this year’s Mr. Football Award contest was without a doubt the hardest decision that’s been made.

“This was by far the toughest decision we’ve had in the 12 years of the Mr. Football Award,” he said. “All four athletes involved in the contest could have won, but it ultimately came down to the fan vote and that’s what helped put Cody White over the top.”

Hungry Howie’s Marketing Coordinator Brian Beard said that he was pleased with the Mr. Football Award Contest and praised White as both an athlete and student. 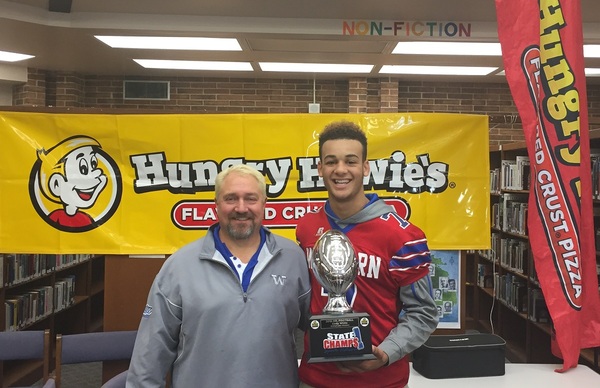