A packed Warriors home crowd was on hand for the eighth annual Warrior for Warriors “Pink-Out” game at Walled Lake Western’s Warrior Stadium.

Thousands were in attendance to support the cause as a sea of pink filled the Warrior stands. A pre-game ceremony honored cancer survivors and many loved ones who passed away from the disease. Western players played in honor of a loved one who has been affected by cancer, wearing the name of that friend or family member on the back of their pink jersey.

The Knights got on the board first with an 80 yard scoring drive after Western kicker Aidan Jennings’s boomed the opening kickoff out of the back of the end zone. 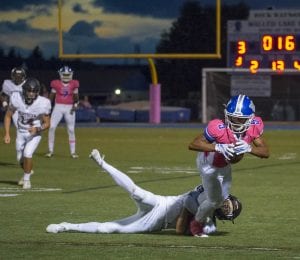 Northern’s long drive featured two third down conversion runs by quarterback Brendan Shelby. The Northern offense would then eat up six minutes of clock before Thomas Polan scored from two yards out. Andrew Moran booted the point after to give Northern the early 7-0 lead with 6:15 remaining in the opening quarter.

Western’s KJ Jackson returned Moran’s kickoff 44 yards to the Knights’ 49 yard line, which set up a 25-yard field goal by Jennings to cut the Northern lead to 7-3 at

the end of the first quarter.

After another Jennings’ touchback, Northern added to their lead when Moran booted a 36-yard field goal, putting the Knights up 10-3 with just over five minutes to play in the half.

The Warriors tied the game when quarterback Sam Johnson found Justin Gabriel in the flat, and the speedy sophomore receiver scampered 65 yards to the Northern 25 yard line. A Northern personal foul put the ball on the Knights’ 10 yard line before Jackson found pay dirt from four yards out to knot the game up at 10-10.

On the next drive, the Knights found themselves in Western territory before stalling at the Warriors’ 34 yard line. After a timeout, Northern head coach Joe Boulus sent Moran and the kicking unit out on the field to attempt a 51 yard field goal. Moran’s kick fell short in the end zone, but a personal foul by Western gave the Knights a new set of downs. Shelby then found Andre Price in the back of the end zone for a 19 yard-scoring strike, and after Moran’s extra-point, Northern took a 17-10 lead into the locker room.

On Western’s first possession of the second half, Brown took an inside hand off up the middle and sprinted 42 yards to the end zone to lock the game at 17-17 with 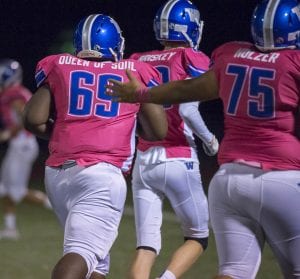 over 10 minutes to play in the third quarter.

Tough runs by Shelby, Nyle Elgert and Polan helped the Knights march into the red zone before Shelby scored from six yards out as Northern regained the lead at 24-17.

Following a Western punt, Northern was in Western territory again before turning the ball over on downs after a Warriors’ defensive stand. The Knights led 24-17 at the end of the third quarter.

The fourth quarter was all Western as the Warriors scored 21 unanswered points. Two minutes into the quarter, Johnson found his go-to receiver, Abdur-Rahmaan Yaseen, in the back corner of the end zone for a 17-yard touchdown. However, after a Warriors’ botched snap on the extra point, the Knights held a narrow 24-23 lead with 10:21 left in the game.

Another defensive stand by the Warriors, and more punishing runs by Brown, put Western at the Knights’ 14 yard line with two minutes to play. Brown took an inside handoff from Johnson and followed his brother Spencer’s block to score from 14 yards out to give the Warriors their first lead of the night, 29-24. Warriors’ coach Alex Grignon elected to go for two and Johnson, on a QB-draw rumbled in from two yards out to make the score 31-24 with 1:53 remaining.

After a sack by Western’s Spencer Brown, the Knights, running their hurry-up offense, had the ball at their own 45 yard line facing second down and 20. Shelby scrambled to his left, but Warriors’ cornerback Jarard Tate jumped the receiver’s route, picked off the pass, and sprinted down the Northern sideline for a 45-yard pick-six. Jennings’ extra point capped off the scoring for the night, and the Warriors escaped with the 38-24 victory.

Defensively, Western seemed like a different team in the fourth quarter. When asked about the defensive adjustments on Northern’s final drive of the night that set up Tate’s heroics, Grignon said, “We knew they liked outs and curls/comebacks and we finally had them in a position where they had to throw. We moved him (Tate) to nickel and he made a great play. To be honest, that was just a very good player making a great play.”

Grignon elaborated on the second half changes after trailing 17-10 at the break. “We definitely, had to make some key adjustments, and the guys kept playing hard. We stressed taking it one play at a time and the kids responded well. Credit to Northern tonight. I thought they played a great game.”

Grignon praised the play of his junior tailback. “CJ is a heck of a football player and plays hard on every snap. He makes some great cuts and finds space very well. We need to do a better job of keeping him fresh throughout the game.”

For the Knights, Shelby had 26 carries for 190 yards and a touchdown and threw for 32 yards (4/15) and another score. Elgert rushed for 49 yards on eight carries.

With the victory, Western is 4-1 (4-0, LVC) on the season and will travel to Lakeland on Friday. Northern falls to 1-4 (1-3, LVC) and will host Waterford Kettering on Friday.

Following the game, survivors and families of honorees met the team and coaches on the field and received Pink-Out jerseys from the players who played in their 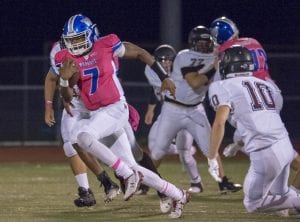 honor. Linda Ishbia, who chairs the event, said, “Warriors for Warriors has raised over $490,000 for cancer research since its inaugural year in 2011.”

Ishbia continued, “In all of the different events that we have held at Western, we have been able to honor over 1,000 people who have been affected by cancer in the eight years since we began our Warriors for Warriors charity (est. 2011.)”

When reflecting on the emotional Warriors for Warriors week-long event, Ishbia said. “This event brings people together from all areas. Tonight we had people here from Wisconsin, Ohio and Kentucky. It is a wonderful feeling to see people together for a common cause. As we say, our motto is ‘NO ONE FIGHTS ALONE’, and the thousands of people who were here in attendance tonight and all of those who helped make this event a huge success over the years are evidence of that.”