COMMERCE TOWNSHIP, Mich. -- After a rough 28-7 loss last week to Detroit Catholic Central, the Walled Lake Western football team was ready to re-oil the machine and get back to work. Heading into Thursday night's matchup against Milford, Western was a huge favorite and expected to get the job done.

It is safe to say they did.

Led by senior quarterback Sam Johnson, Western rolled to a 35-0 halftime lead and played with a running clock for the entire second half.

"We knew we had to work hard coming off an L," Johnson said. "We knew what we had to do. We watched a lot of film, corrected mistakes. We've still got a few too many penalties that we'd like to clean up as the season goes along. As a team, we played great."

After going just 10-for-23 last week with an interception, Johnson was able to pick apart the Milford defense by tossing three touchdowns on 8-for-14 passing while adding another touchdown on the ground on a 20-yard run.

Although the win was expected, it was a win that still felt good for Johnson anyway.

"That's just timing (with receivers), working on those things inside practice, outside of practice," Johnson said. "I think we looked pretty good. Like I said, the O-line did a good job. It was great protection so that results in a great throw and a great catch. With the athlete we got, I believe they can make people miss in space. 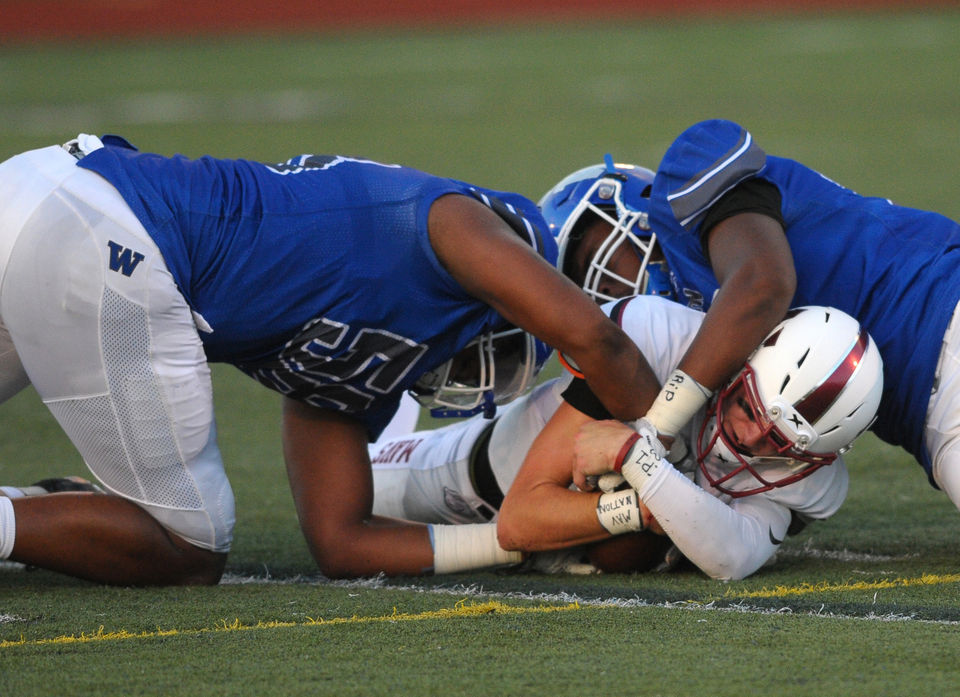 Out-gaining Milford on offense, 214-77 in the first half, Western went on to rack up a whopping 13 yards in the second half.

Really, Western's work on offense was all but said and done at halftime. The Warriors defense smothered the Mavericks to just 138 yards total offense for the game while forcing two fumbles, two interceptions and two turnovers on downs.

"We just wanted to focus on getting better," Grignon said. "One day at a time, one game at a time and get back to being polished and doing what we're good at. Our worst enemy is us right now and we just have to keep getting better every week." 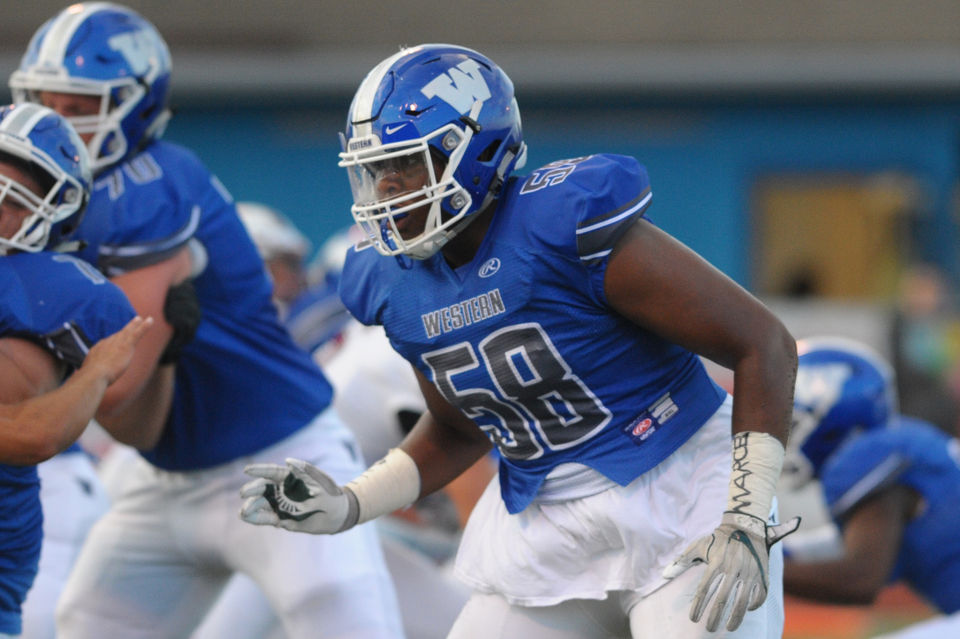 Spencer Brown is a standout in many ways on the football field. Of course, he stands 6-foot-8 and 295 pounds, so that helps. However, he's also a three-star offensive tackle committed to play for Michigan State next year.

Yet, although the Spartans have recruited him for his offense, he came up with an interception on defense.

With Milford quarterback Andrew Minton facing plenty of pressure, he got rid of the ball and it fell into Brown's hands for the first interception of his career.

"I had a couple of blocked punts and scoop-and-scores, something like that," Brown said. "But that's the first time I ever picked. I tried to house it."

Although he did not take it 85-yards to the house, it was still an entertaining interception return for the two-way lineman. Dragging a host of Milford defenders while his Western teammates did their best to bounce as many of them away as possible, Brown rumbled 16 impressive yards before falling.

"I felt somebody grab my ankle but I busted out of that," Brown said. "I just felt everybody on my back and I just kept going ... it was crazy."

Of course, he stayed on the field for the next play as Western transitioned to offense.

Could Western line him up as a fullback?

"He would like that," Grignon said with a laugh. "We're trying to keep him fresh going both ways as it is. He's a great player and we're just pushing those guys to hold him to those standards he's going to be held to next year. I'm super proud of the way the guy's played and responded." 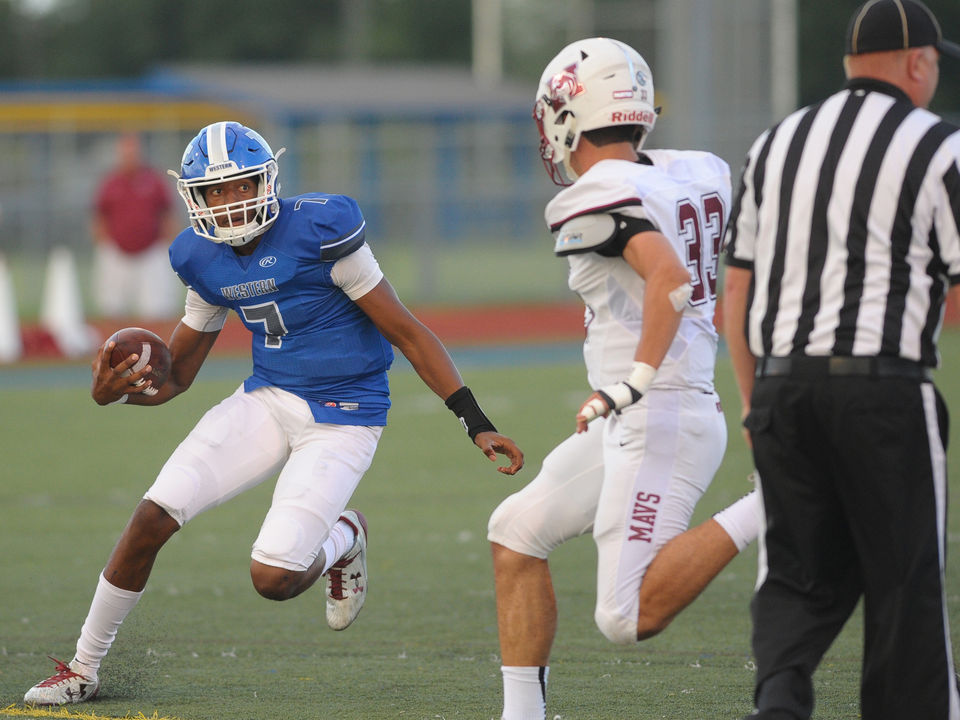 The senior Boston College commit finished 8-for-14 for 110 yards and three touchdowns. He also had a 20-yard touchdown run to open the scoring for the game.

He did all of that in the first half and didn't play in the second half with the game in hand. 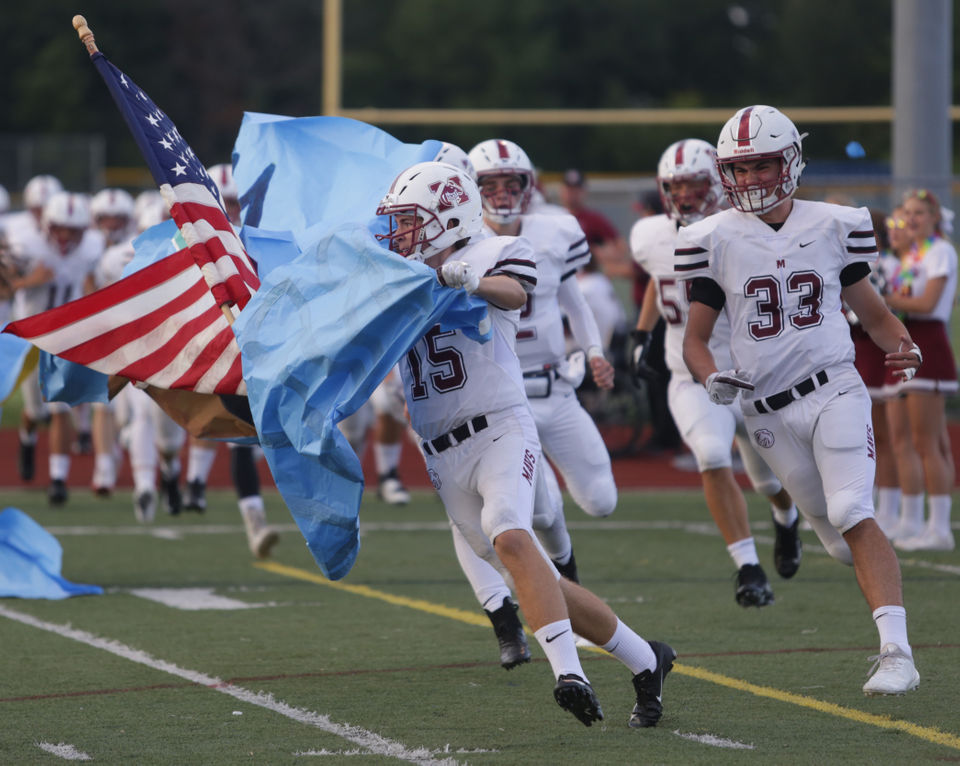 He picked off Sam Johnson in the second quarter. He also had three catches for 26 yards and 5 yards rushing. 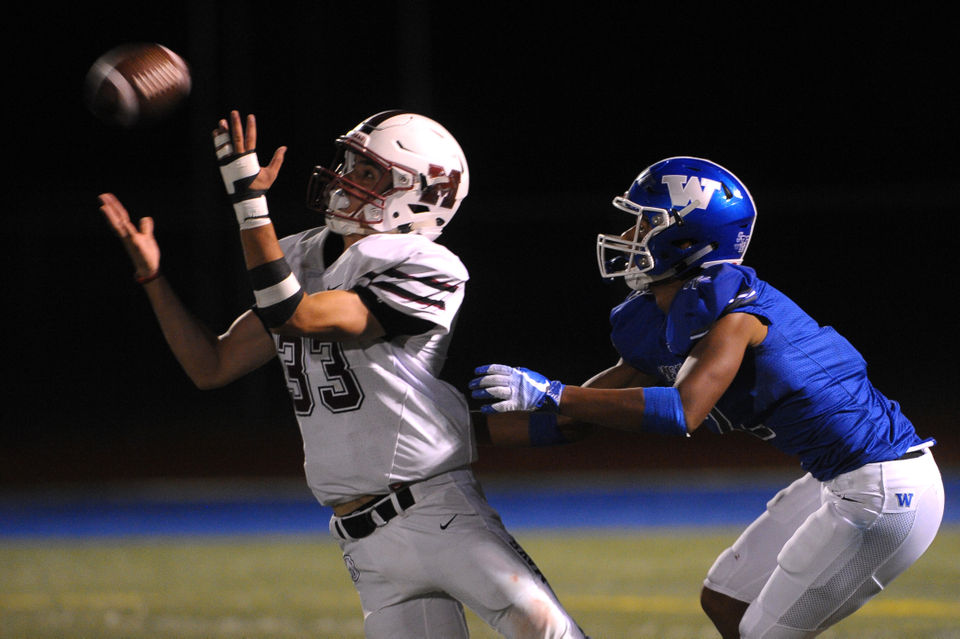 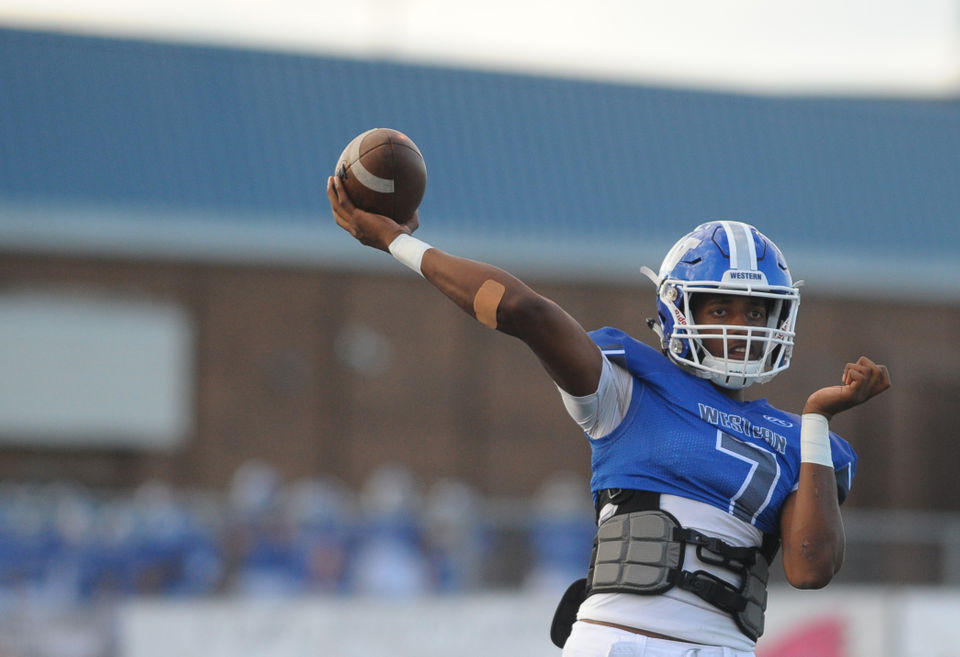 The Warriors cruised down the field on the first drive of the game, with Johnson running it in from 20 yards out to cap a five-play, 58 yard drive.

Milford went three-and-out on its first drive and, on the punt, Baker returned it 53 yards to the end zone. However, it was called back on a running into the kicker penalty. That did not stop Western from finding the end zone, however, as the Warriors drove 55 yards on 10 plays to take a 14-0 lead. The touchdown was scored when Johnson found Yaseen for a three-yard slant pass

Western's first drive of the quarter ended in Johnson tossing an interception over the middle of the field as Milford's Chance Murray snatched the ball away. However, Western intercepted it right back in the ensuing Milford drive as CJ Brown picked off Milford quarterback Andrew Minton. The Warriors made the most of it by going 49 yards in four plays as Johnson hooked up with junior Abdur Yaseen for a 20 yard touchdown pass to go up 21-0.

Then, on Milford's next drive, Sam Ahern picked up a fumble in the backfield and returned it 45 yards for the score, making it 28-0.

On the first play of the next Milford drive, Western recovered another fumble as Kalil Brown fell on the ball at the line of scrimmage. One play later, Western was in the end zone again as Johnson passed 16 yards to Malcom Baker to make the score 35-0 just 18 seconds after making it 28-0.

Western out-gained Milford, 214-77, on offense in the first half.

It was a running clock from the start of the third quarter. Milford started off with the ball and had the only possession of the third quarter. The possession didn't end until the first play of the fourth quarter when Brown grabbed an interception. From then on, backup quarterback Zach Trainor took snaps for Western. Western surrendered another interception in the quarter while Milford turned the ball over on downs.

MORE: Check out the full gallery of the game