A little over a decade ago, Brent Zdebski was wreaking havoc for opposing quarterbacks in the KLAA (Kensington Lakes Activities Association). Then a starting linebacker for his father’s 2011 Walled Lake Western squad, Zdebski helped the Warriors capture the city crown, the KLAA North championship and both district and regional titles before falling to Lowell in an overtime thriller in the MHSAA Division 2 semifinal.

A chip off the old block
To say that coaching is in his blood would be an huge understatement. Following in the footsteps of his dad, Mike, who is the winningest coach in the school district’s history, Brent has worked his way up the college coaching ranks and was recently named an assistant coach on Ryan Day’s staff at The Ohio State University.

On to The Ohio State University
On joining Ryan Day’s staff in Columbus,  Zdebski said, “I can’t quite put it into words. I have a few weeks under my belt already, and the people, culture here, and facilities are all the best in the country. I am excited for this opportunity and the staff here to work with.”

Zdebski said that he and his fiancé Whitney and pair of Dachshunds, Fred and Ethel have already settled in near the Ohio campus.

“I am so thankful for Whitney’s love and support. I am so excited for our next journey in Columbus and wherever life takes us.”

A student of the game, Zdebski said that his passion for football and eventually coaching started decades ago.

“One could argue I was born into it. I’ve always admired my dad and his love for football. Just the opportunities and example my dad provided me growing up around the game, watching film with him before I could read. I always admired how much time he put into it and his why.”

Growing up at 600 Beck Road
Zdebski continued, “The Warriors I grew up watching were my heroes and the guys I got to play with were my brothers. 600 Beck Road was home to me, where I learned and fell in love with football, blessed me with a family, community and lifelong relationships. If you ain’t a Warrior…” 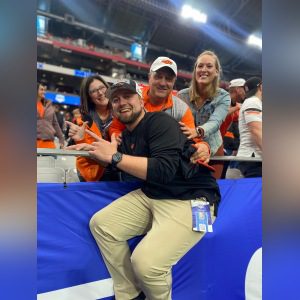 The time spent studying films over the years will help Zdebski in his new role as the Buckeyes’ quality control coach. His duties will primarily consist of preparing OSU for upcoming games, sometimes by analyzing and organizing game film for future opponents.

Gridiron roots
When further discussing his football roots, the newest member of the Buckeye staff said, “I would not be where I am today without all of my coaches from my days with the LA Hawks, the Walled Lake Braves to my days at Western. Coaches such as Eric Bambard, Wayne Probst, Terry Neyens, Brian Gamble, Bruce Roesler, Pet Lesner, Mike Stewart, Al Lesperance, Bob Chiesa, Mike and Mark Roffi, Nick Michniacki, Brian Vieaux, Paul Diaz and Sheldon White.”

Joining Buckeye Nation
When asked why someone who grew up in the mitten would be interested in coaching at that school in Columbus, Zdebski responded.

“The people and the opportunity to work with and be the best. The Ohio State University, the tradition, standard and culture of Buckeye football is second to none. As a kid from the state up north, I grew up watching Ohio State win the Big 10 and national championships. To have a chance to live that… What’s not intriguing?”