Walled Lake Western traveled to South Lyon on Friday night to take on the Lions in the MHSAA, D2, District 12 semifinal game. Western topped South Lyon 35-24 earlier in the season. The teams came into the contest with identical 5-2 records.

Familiar Foes
With a beautiful night for football, and playoff implications on the line, the teams did not disappoint and provided those on hand with an exciting, fast-paced and high-scoring semifinal game. After winning the toss and deferring, the Warriors’ defense forced the Lions to a three and out to take over on the Western sixteen-yard-line. Long pass hookups by quarterback Zach Trainor to receivers Cam Kinaia (41 yards) and Jonathan Abele (19 yards) landed the Warriors in the red zone. However, the drive would stall and Western would settle for a 37-yard field out by senior kicker Evan Bauman to take the early lead with 7:29 left in the opening quarter. 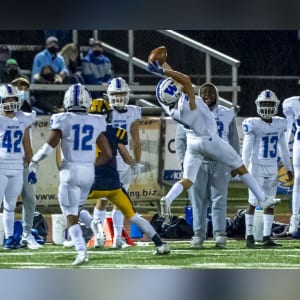 Lions roar back
South Lyon junior quarterback, Dawson Skupin and the Lions put together an impressive scoring drive that resulted in a 26-yard touchdown pass from Skupin to junior Coy Plummer. The score was set up when Skupin found senior Jack Petsch on a jail break screen for a 44-yard gain. Rolling the dice early, South Lyon head coach Matt Henson elected to go for the two-point conversion and the Lions succeeding when Zack Ford scampered into the end zone to give South Lyon an 8-3 lead with 4:47 in the quarter.

The Warriors would bounce back when Abele caught a screen pass from Trainor and sprinted 67 yards to pay dirt to put the Warriors on top again, 10-8 with 2:49 in the first quarter. South Lyon junior slot receiver Quinn Fracassi caught two passes from Skupin for 52 yards before finding the end zone for the Lions and putting them on top, 15-10 at the end of the first stanza.

Seesaw battle
Sophomore Darius Taylor would put Western back on top, catching a 55-yard bomb from Trainor. Unfortunately for the Warriors, the 17-15 lead would be their last lead of the night. South Lyon would score to go up 22-17 when Skupin hit senior Lucas Doty on a post for a 55-yard score.  The defensive units would then step up as the teams exchanged interceptions in the second quarter with Fracassi picking off a Western pass and Abele returning the favor to give the Warriors the ball at midfield.

Lions make a stand
Western would drive the ball down to the Lions’ five-yard line, but would turn the ball over on downs when Trainor was stopped just shy of the goal line on a fourth and goal play from the Lions’ three-yard-line. Both teams would head to the end zones at the half with South Lyon clinging to a 22-17 lead.

Defensive struggles in second half
Both squads would struggle defensively to get off the field in the second half. Coming into the game, the Warriors defensively only yielded forty points over the past three games. On Friday night though, Skupin and Lions were too much for the Warriors defense as the junior quarterback and talented group of receivers gave Western fits and created matchup issues all night. The Lions would score twenty-straight points in the second half to increase the lead to 42-17 with 7:10 left in the game. South Lyon would score on a 19-yard bootleg by Skupin, a four-yard run by Tommy Donovan, and a five-yard rush by Jordan Singleton. 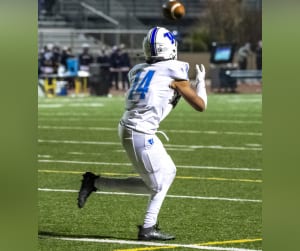 Warriors on the move
With the postseason hopes slipping away, the Warriors struck quick, scoring 14 points in three minutes. Trainor would connect with Taylor again for a 55-yard TD-strike and moments later, Pierce Muthui-Edwards sprinted four yards to the end zone. Following a Trainor to Taylor successful two-point conversion, Western cut the deficit to 42-31 with 4:17 left.

Too little, too late
Down two scores and playing desperate, the Warrior defense showed some life in the final minutes when Max Mouranie recovered a South Lyon fumble. However, Western coughed up the football on the ensuing play with a strip-sack and recovery at the Western 38-yard line. 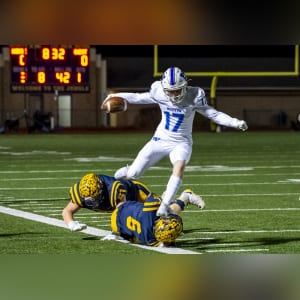 Following a Lions’ punt, Abele caught a pass from Trainor in the flat and rambled 56-yards down to the Lions’ six-yard line. Abele, the heart and soul of this year’s Warriors’ squad would finish the game with nine catches for 216 yards and a score to go along with his pick on defense to cap off a fantastic senior season. Western would manage to score with six seconds left on a Trainor to Justin Gabriel touchdown pass, but trailed 42-37. After an unsuccessful onside kick, the Lions held on for the five-point victory and advanced to the MHSAA, D2, District 12 title game which they will host North Farmington on Friday night.

The 2020 Warriors will graduate 20 seniors who played the season in memory of fellow teammate Justin Lee, who passed away in 2018.