Walled Lake- Walled Lake Western welcomed Waterford Mott to Dick Watson Field on Friday night for a MHSAA D2 first round matchup. In week two of the LVC season, the Warriors (4-2) handled the Corsairs (2-3) 45-21 on the road at Mott. Friday night was quite different though, with both teams taking the “there’s no tomorrow” approach. The Warriors were eventually able to prevail and outlast the Corsairs, 14-13 to advance to the second round. 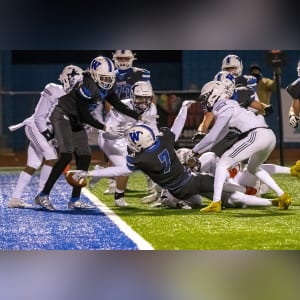 Western running back Thomas Young finds pay dirt from five yards out in the Warriors’ 14-13 playoff-win over Mott. PHOTO by Teresa Presty.

Opening quarter
Western received great field position when senior defensive end, Al Schram recovered a Corsairs’ fumble near midfield. The Warriors then jumped out to a 7-0 lead at the end of the first quarter when tailback Thomas Young found pay dirt from five yards out. The touchdown was set up by a Jonathan Abele 33-yard reception from quarterback Zach Trainor. 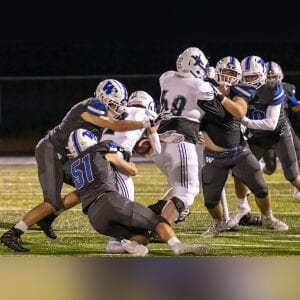 Extending lead to two scores
Following a Mott punt, the Warriors took over near midfield.  Senior tailback Pierce Muthui-Edwards ran for 9 yards, and then Trainor hit Abele (7 catches, 80 yards) in the flat for a gain of sixteen yards, moving the Warriors into the red zone. On the next play, Trainor found a wide-open Cam Kinaia in the back corner of the end zone for a twenty-yard TD-strike. After junior Adam Lampela booted the extra point, Western led 14-0. On the night, Trainor would throw for 138 yards (14-19) and a score.

Smooth sailing for Corsairs
Mott received a spark from its defense when safety Ashton Tong intercepted a Warriors’ pass and returned the pick to the Corsairs’ forty yard line. Senior quarterback Jack Beno wasted no time taking advantage of the turnover as he hit Syrr Sanders for a fifty-five-yard pass completion down to the Warriors’ five-yard line. Senior Xaion Styles then rumbled five yards for Mott’s first score of the game, cutting the Western lead to 14-7. Neither team could muster any offense at the end of the second quarter, and both teams headed to the break with Western up 14-7. 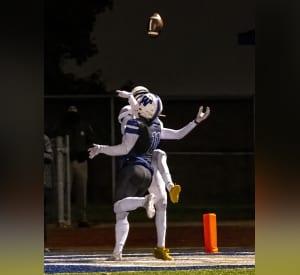 Western defensive back Carson Barringer (11) breaks up a pass in the end zone in the Warriors’ 14-13 playoff win over Mott. PHOTO by Teresa Presty.

After the teams played to a scoreless third quarter, Mott would score the only points of the second half. After impressive, scrambling runs by Beno, the senior signal caller found Jaylen Varice open down the Mott-sideline for a 31-yard touchdown pass with 8:49 left in the game. Mott initially converted the PAT, but a penalty forced a re-kick which sailed wide-left.

Survive and advance…
Mott concludes its season at 2-4. The Warriors (5-2) advance to the second round of the MHSAA D2 playoffs and will travel to South Lyon (5-2) on Friday night. The Warriors topped the Lions on the road, 35-24 earlier in the LVC season.