Orchard Lake – The last time Zach Trainor played in a game for Walled Lake Western, he completed 75 percent of his passes for 385 yards and 5 TDs.

But that strong outing came in a 57-56 loss to Muskegon Mona Shores in the Division 2 state semifinals.

Trainor, who was The Detroit News Dream Team quarterback, was back on the field in his senior year’s season opener for No. 15 Western Thursday night at Orchard Lake.

Things didn’t go as Trainor had planned as St. Mary’s constantly put pressure on him, handing Western a 28-7 loss. 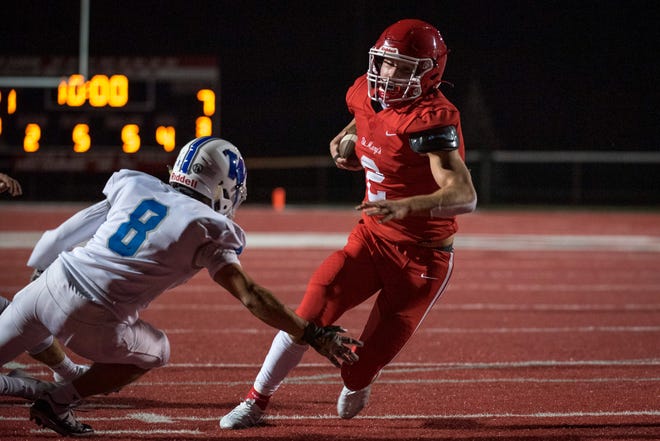 It was also the head coaching debut of Mike Weiskopf who had been an assistant at Western the last 23 years, for nearly 20 years under Mike Zdebski, and then the past two years under Alex Grignon.

The season was pushed back three weeks due to the COVID-19 pandemic. The MHSAA initially postponed the season, pushing it to spring on Aug. 14 before deciding on Sept. 3 to bring it back, giving teams 10 days to practice starting the day after Labor Day.

“It’s different, doing different things, sometimes you wonder what the heck we are doing, but the kids adapted, and you have to deal with adverse conditions and we’re out here playing football, a game these kids love,” said George Porritt who was starting his 31st year as St. Mary’s head coach.

St. Mary’s made things tough early with Collins getting penetration and recovering a fumble on Western’s first series to give St. Mary’s the ball at Western’s 27.

St. Mary’s capitalized on the turnover when Tommy Bauss broke loose up the middle for a 21-yard TD.

Trainor brought Western back on an 80-yard drive when he connected on 7-of-8 passes for 77 yards, including an 8-yard scoring toss to Thomas Young to pull even on the last play of the first quarter

Western’s scoring drive was aided by a hit to the helmet penalty after Justin Gabriel caught a pass near the St. Mary’s 26.

St. Mary’s kept the ball away from Western for the majority of the second quarter, advancing into Western territory on two occasions, only to turn the ball over both times, the first one on a fumble after picking up a first down inside the 30, then on an interception with just over a minute left in the half.

Trainor was 8-for-9 in the 7-7 first half for 87 yards with the lone incompletion coming on the second series when a perfectly thrown ball was dropped by a wide open receiver at the St. Mary’s 10.

St. Mary’s scored on the opening drive of the second half, taking advantage of good field position, starting at its own 40 and scoring on a 37-yard run by Bauss for a 14-7 lead.

Trainor quickly found sophomore receiver Darius Taylor for a 40-yard pass to the St. Mary’s 40, but then a holding penalty took Western back inside its own territory on the next play, followed by a sack by Williams and then yet another sack by Williams and Selakowski to force a punt.

Western had actually forced a 44-yard field goal try, which was missed by Michigan-bound kicker Tommy Doman, but a roughing the kicker penalty resulted in St. Mary’s having a first down at the 12 and Aidan Boyle’s seven-yard run on third-and-5 at the 9 set up Hillie’s TD run.

Junior cornerback Raid Zerki intercepted a Trainor pass late in the third quarter at St. Mary’s 38 which led to St. Mary’s final scoring drive, capped off by Hillie’s 1-yard run for the 28-7 cushion with 9:17 remaining.

“I thought our defensive line played well. That’s an outstanding quarterback and they have good receivers so that pressure was big.”

Trainor finished 17-of-25 for 160 yards and an interception. Gabriel had eight receptions.